Sissi and her family all return to Possi. Tommy and his new-found-father, Thomas Gluk move in together into their new castle- Across from Possi. [45] Prince Fronz and Sissi announce their wedding will take place in one week. [46] Sissi falls ill off her horse. And no one is able to cure her. Councilor Zottornick finds a look alike; Dr. Frxer... And Dr. Frxer elixir saves the day. [47] Zottornick and Count Arkas train Dr. Fritz to be a Prince Franz while the real Prince Franz is kidnapped and impressed. The imposter fake-Prince falls in love with Helena, and so tells Sissi that he no longer wants to marry her. [48] Zottornick assumes political control over the emperor. Helena prepares for her wedding, but Dr. Fritz has a change of heart. [49] Princess Sissi and Prince Franz are finally able to marry, and Dr. Fitz gets his happy ever-after with Helena on a farm. [50] 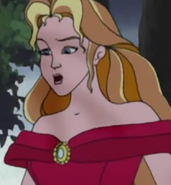 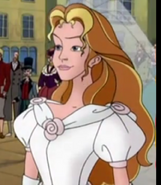 Retrieved from "https://princess-sissi.fandom.com/wiki/Princess_Sissi?oldid=5413"
Community content is available under CC-BY-SA unless otherwise noted.